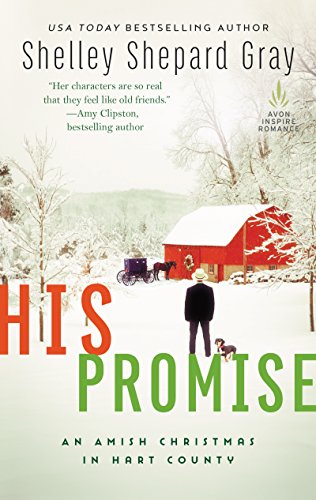 "His Promise"
By Shelley Shepard Gray


New York Times and USA Today bestselling author Shelley Shepard Gray’s latest Christmas novel in her Amish of Hart County series.
It’s set to be a white Christmas in Hart County, and Grace King is pet-sitting in a beautiful home with only a difficult dachshund for company. Just as she starts to miss the bustle of her large Amish family, Grace runs into a familiar face. Living right next door is John Michael Miller. He’s a fireman now, but five years ago, he had courted her older sister, then broke her heart. Seeing him again stirs Grace’s anger, but also reminds her of deeper feelings she’s done her best to deny.
The infatuation John Michael once saw in Grace’s eyes is long gone, though his complicated attraction to her remains. He had walked away all those years ago when he realized he was falling in love with the wrong sister. Now, as suspicious fires are set in their community, that’s not an option. Grace dismisses his warnings, and John Michael vows to keep an eye on her. But he can’t help wondering if he’s reconnected with Grace, only to risk losing her again.
Now all John Michael wants for Christmas is to keep Grace safe, in the hopes that they can one day have a future together.

I have to admit that when I see a book by Shelley Shepard Gray, I know that I am in for a treat! My husband may not always agree though!! I tend to get so engrossed in her stories that the real world is left behind, my usual tasks for the day are ignored and left unfinished!!! This book is the sixth in the Amish of Hart  County series, but can be thoroughly enjoyed as a standalone.

This Amish genre novel differs somewhat from the norm. The Englischers are very much a part of this story and the characters certainly do not isolate themselves from them. I would consider this book to be a sweet romance full of suspense and yes, even intrigue! The plot had many surprising twists and turns. Just when it seemed as if I had a handle on what was happening , a new event would interrupt my thoughts and cause me to change my mindset as to what was going to occur next.

Love is in the air, as is danger and fear. Although it is the Christmas season, a time of joy and thankfulness, the characters are lonely , worried and feeling great fear.  The absence of family makes one really feel the loneliness that Grace is experiencing. Can one small dachshund and a single young man feel the empty feelings???  Anyone who knows the author, realises that she has a special place in her heart for this sweet small breed of dog. Snooze is described is such detail , that I kept wanting to reach out and give him a cuddle! As usual, Shelley describes her main characters in such realistic detail, that you walk alongside them during their good times as well as their bad ones. It was so easy to identify with Grace and her trials, her times of confusing thoughts , as well as her fear for her life. God had to take charge and keep Grace and John Michael focused on what was important. Look up! Not at the past or even the present. Look to Him to carry one through tough, confusing times.

This is  a five star book!! The best in the series and a marvellous read for the Christmas season!! Don't miss it!! I am now eagerly awaiting a new book from this author!! Don't take too long, Shelley!!!

This book was received from the author. A positive review was not required. The thoughts and opinions expressed are honest and my own.

Shelley Shepard Gray lives in southern Ohio and writes full time. A busy wife and mother of two, she spends her days writing and keeping track of her two teenagers. Her two dogs keep her company when she writes in her basement.Shelley enjoys writing about the Amish and visits Amish communities in Adams and Holmes counties several times a year. When not spending time with her family or writing, she serves on several committees in her church.She also bakes a lot, loves coconut cream pie, and will hardly ever pull weeds, mow the yard, or drive in the snow.Shelley also spends a lot of time on line! Please visit her website, www.shelleyshepardgray.com to find out her latest news...or become her friend on FaceBook.
at November 27, 2018